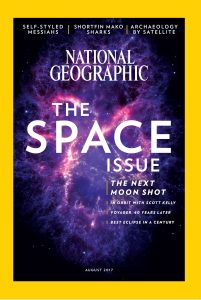 The youthful Indian engineers took their seats, a bit nervously, in a makeshift conference room inside a cavernous former car-battery warehouse in Bangalore. Arrayed in front of them were several much older men and women, many of them gray-haired luminaries of India’s robust space program. The first Asian space agency to send an orbiter to Mars, it also nearly tripled a previous world record by launching 104 satellites into orbit in a single mission this past February. The object of everyone’s attention was a small rolling device barely the size of a microwave oven. Notes National Geographic Magazine

The members of the young crew explained their plans to blast the device into space aboard a rocket late this year, position it into lunar orbit nearly a quarter million miles away, guide it to a landing on the moon, and send it roaming across the harsh lunar landscape. The engineers of TeamIndus said their company would do all of this on a shoestring budget, probably $65 million, give or take, the vast majority of it raised from private investors.

And National Geographic For Little Kids