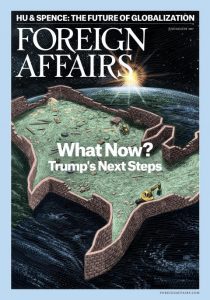 For many decades after World War II, a broad range of countries shared a fundamental economic vision. They endorsed an increasingly open system for trade in goods and services, supported by international institutions; allowed capital, corporations, and, to a lesser extent, people to flow freely across borders; and encouraged the rapid spread of data and technology. As trade expanded, global living standards improved dramatically, and hundreds of millions of people escaped from poverty.

Today, every aspect of this globalized economy is under assault. A popular backlash against free trade and unrestricted cross-border movements of capital has picked up momentum. The ideal of freely flowing information has clashed with growing calls for privacy rights, the protection of intellectual property, and increased cybersecurity. Across the developed world, sentiments have turned strongly against immigration, especially as waves of Middle Eastern refugees have flooded Europe. And after several successful rounds of multilateral trade negotiations in the postwar years, new agreements have become much rarer: the World Trade Organization (WTO) has not completed a single full round of successful negotiations since its creation in 1995. notes Foreign Affairs Magazine

Last June, the United Kingdom voted to leave the EU, sparking the worst political crisis in the union’s history. Meanwhile, in the United States, President Donald Trump has vowed to put “America first.” In his first week in office, Trump withdrew from the Trans-Pacific Partnership (TPP), the 12-nation free-trade deal orchestrated by Trump’s predecessor, and he has pledged to renegotiate the North American Free Trade Agreement, which he has called “the worst trade deal maybe ever signed anywhere, but certainly ever signed in this country.” The Transatlantic Trade and Investment Partnership, a deal currently being negotiated by the United States and the EU, also faces an uncertain future, bogged down in strong opposition on both sides of the Atlantic.